Faith Hill’s “Where Are You Christmas?”

To some, it’s ‘that song from the Jim Carrey remake of How The Grinch Stole Christmas’. To others, it’s a source of frustration. Each year the song rises onto the top 10 of at least one Billboard Holiday Chart. Why? In short, two words:

Little-known fact: “Where Are You Christmas?” was co-written by the Queen of Christmas herself, Miss Mariah Carey. Why isn’t she singing it, you ask? That’s a great question. That answer can also be summed up in two words: 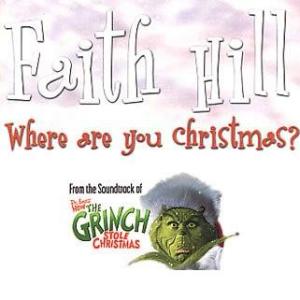 Back in 1998/1999, composer James Horner landed the job of scoring Dr. Seuss’ How The Grinch Stole Christmas. At some point, he reunited with Will Jennings to craft a song for the film. Important sidebar: Horner & Jennings are best known for writing Celine Dion’s “My Heart Will Go On”. Needless to say, they can write a helluva song.

Initially, they created a song called “Christmas, Why Can’t I Find You?” That song appears in the film, sung by Taylor Momsen’s character Cyndi Lou Who. It features some of the lyrics of “Where Are You Christmas?” and slight melodic similarities.

The full story of the collaboration is still a mystery. At some point though, Horner and Jennings incorporated Mariah Carey’s songwriting talents to create a full-length song to lead the soundtrack. The result was a power ballad with a festive edge.

Mariah was in a unique space when “Where Are You Christmas?” was written. Recently emancipated from a controlling marriage, she was calling the shots and making the music she truly wanted to make, namely, Butterfly. Unfortunately, Mariah was still under the control of ex-husband Tommy Mottola professionally. By this point, Mariah’s relationship with Columbia Records & Sony Music was strained, to say the least. With Mottola still CEO of Sony Music, he had the ability to make Mariah’s professional affairs difficult for her.

Carey, Jennings, and Horner composed “Where Are You Christmas?” sometime around 1999 and 2000. It was of course, intended to lead the soundtrack to the Grinch.

Here’s where the problems arise.

MCA Records & Universal Music were set to release & distribute the film’s soundtrack. MCA and its parent Universal were a direct competitor to Columbia Records and Sony Music.

As a songwriter, Mariah didn’t need her label’s permission to compose the song. Typically recording contracts (singers) and publishing contracts (songwriters) operate separately. However, performing the song for MCA Records required the permission of Columbia Records & Sony Music. That meant Tommy Mottola ultimately needed to permit Mariah to release “Where Are You Christmas?”

While the exact details remain elusive, it’s understood that permission was either denied or revoked. Mottola has always been placed with the blame. Around this time, Mottola was known for interfering with Mariah’s continued success and creative choices. This all took place shortly before the “Loverboy” fiasco.

It’s extremely unlikely that Mariah passed up recording a song she wrote. To date, there are only about a dozen songs out there Mariah has written and not recorded. In most cases, they were for a friend, an artist on her Crave label, or a mentee. Mariah co-wrote “Where Are You Christmas?” with every intention of singing it.

Over the years, the song continues to perform well on Billboard’s Holiday Charts. Faith Hill performed the song live in 2016, 16 years after it’s release.

Meanwhile, Mariah Carey remains mum on the subject. The song never gets discussed, so firm information on the situation continues to be out of reach. In 2010 when Mariah geared up to release Merry Christmas II You, there was wide speculation that her version of the song would finally surface. However, the song remained absent.

For now, all we have is Faith Hill’s stellar performance, and her positively-2000’s crimped hair in the music video.

In 2020, Mariah discussed “Where Are You Christmas?” with Andy Cohen, and explained that a demo version does exist somewhere. A reference track which was sent to Faith Hill doesn’t feature Mariah though, she had background singer MaryAnn Tatum record over her vocal. Mariah also expressed a desire to share it with the world, so hopefully one of these Christmases it’ll show up under the tree!

On #WWHL, @MariahCarey discussed her holiday track 'Christmas, Why Can't I Find You?' that was ultimately renamed, re-recorded, & released by Faith Hill as part of the How the Grinch Stole Christmas soundtrack. 🎄 pic.twitter.com/sm44o3jS9b

THE 97, formerly known as EST. 1997, is a “contemporary, yet nostalgic” online music magazine focusing on popular music: reliving the splendor of the nostalgia of “back then,” but also celebrating “the now.” Our focus is on our core female artists: THE 97, but by no means will we stop there. Our goal is to provide quality, thoughtful writing that is purely about the music.