Over the course of Aretha Franklin’s career she recorded more than 40 studio albums. Most of these albums are readily available to stream across Spotify, Apple Music, and Tidal. However, 6 of Aretha’s albums are absent from all platforms. While none of them rank among her best work, each album has at least a song or two of essential listening. Five of the albums were released in the 1970’s. The sixth was her last body of mainly original work, released in 2011. This is a guide to navigating these 6 elusive Aretha Franklin albums.

The first five albums coincide with a shift in Aretha’s success at Atlantic Records. After an unparalleled string of genre-defining hits from 1967-1973, Aretha’s success slowed. Popular music shifted, but Aretha did not. The change began with 1973’s Hey Now Hey (The Other Side Of The Sky), produced by Quincy Jones. Expected to be a triumph, the album tanked. Things did turn back around momentarily with 1974’s Let Me In Your Life and 1976’s Sparkle. However, the other 5 albums released from 1974-1979 disappointed commercially.

So, why exclude them from contemporary formats? The story goes that when Aretha left Atlantic Records in 1979, she left with the masters to these 5 albums. That means, Aretha, not Atlantic, owns the rights to these albums. So? Aretha has complete control over the reissuing of this material. As a result, these five albums have never been reissued, remastered, or even released to CD, or cassette, or digital. To this day, they are only officially available on vinyl and 8-track. Only once, on an out-of-print 1994 box set The Queen of Soul: The Atlantic Recordings, were 4 songs from these five albums reissued. The same lack of reissue/digital release can be said for the sixth album, which was released on Aretha’s own label in 2011. 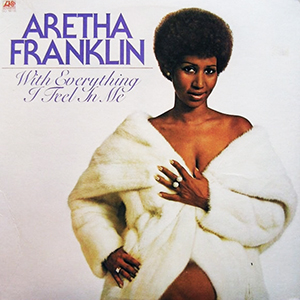 This album indicated that Hey Now Hey with Quincy Jones wasn’t a one-time fluke. Just two years after the 1-2-3 punch of Aretha: Live at the Fillmore West, Young, Gifted & Black, and Amazing Grace, this album confirmed a slowdown in success. Produced by Aretha’s A-team: Jerry Wexler, Arif Mardin, and Tom Dowd, something doesn’t connect like old times. For one, the covers don’t strike like they used to. That’s a sign, because Aretha can essentially demolish any cover she’s presented. The essentials come in the form of Aretha’s self-penned title cut, and her sister Carolyn’s extremely catchy contribution “Without Love”. There’s a first hint of disco here with “Don’t Go Breaking My Heart”, a zipping string cut with freestyle-esque spoken word bits. Yet, in 1974, it feels out of place on this largely R&B album.

Essentials: “Without Love”, “With Everything I Feel In Me”

This is the final effort Aretha released with Jerry Wexler at the boards (who signed her and produced her first big hits). Her own composition “Mr. DJ (5 For The DJ)” opens the album. It’s upbeat, but a far cry from “Sister From Texas” and “Rock Steady”. She demolishes the Van McCoy composition “Walk Softly”, and title track “You”. Fun fact: The title track also appeared on Natalie Cole’s debut album Inseparable, also released in 1975. Natalie went on to end Aretha’s 8-year winning streak of the Best Female R&B Performance Grammy with Inseparable’s “This Will Be (An Everlasting Love)”. There have been rumors that the song was offered to Aretha but she turned it down. Imagine Aretha cutting through that.

Riding high off the success of Sparkle in 1976, Aretha hoped to keep the hits coming. This time around, Aretha linked up with Lamont Dozier of the Motown trio Holland-Dozier-Holland. That trio’s hit compositions (for those unaware) include “Baby Love”, “You Keep Me Hangin’ On”, “Heat Wave”, “I Can’t Help Myself” and “Nowhere To Run”, to name just a few. The first side overpowers, driven by the trippy “Break It To Me Gently” and Aretha’s flawless composition “When I Think About You”. Side B’s “Mumbles/I Got The Music In Me” is strange but enjoyable with some first-class scatting from Aretha, and Aretha’s self-composed title track is, once again, stellar. Out of these five 70’s albums, Sweet Passion is probably the catchiest and most cohesive. She also did a massive cover of “You Light Up My Life” that didn’t make the album. Good luck hunting that one down in high quality.

Essentials: “When I Think About You”, “Break It To Me Gently”, “Sweet Passion”

This one was supposed to resurrect Aretha. Sparkle (which Curtis Mayfield wrote and produced in its entirety), momentarily returned Aretha to prominence in 1976. Enlisting Curtis to produce again was a no brainer. Unfortunately, lightning doesn’t strike twice here. Almighty Fire didn’t fare even half as well as Sparkle. It just doesn’t hit like their previous work. “More Than Just A Joy” has a “Something He Can Feel”-meets-”At Last” progression while “Keep On Loving You” is akin to the Soul Train themes from the mid-70’s. Despite what it lacks, Almighty Fire does close with a stellar cut, “I’m Your Speed”. A stark contrast from the rest of the album, this Aretha composition is just Aretha accompanying herself on piano. It’s one of only two Aretha songs without any rhythm to it, and it’s hauntingly beautiful.

Aretha’s final album on Atlantic Records was a stark contrast from her first, I Never Loved A Man (The Way I Loved You). Gone were the days of groundbreaking gospel-infused soul music. Instead, Aretha pursued the overpowering disco trend with the help of Van McCoy (“The Hustle”), who tragically passed away right before the release of La Diva. This album always gets mis-labeled as a straight-up disco LP, but it’s not. There are disco tracks, but they do not dominate this LP. Those disco moments are cute though, including opener “Ladies Only” and “Only Star”. She gets funky on “It’s Gonna Get A Bit Better” and “Reasons Why”. Her son Clarence’s composition “I Was Made For You” is a beautiful ballad, and the soulful arrangement of “Honey I Need Your Love” harkens back to her brilliant cover of Sam Cooke’s “You Send Me”. And for what it’s worth, the final track on the album “The Feeling” is a straight up disco bop that is required listening.

Essentials: “The Feeling”, “Honey I Need Your Love”, “Only Star”

After years of delays, Aretha followed up 2003’s So Damn Happy and 2008’s This Christmas, Aretha with her final body of mainly original material. Much of the album was recorded in the mid-late 2000’s, but Aretha was determined to release the album independently. She shopped it around and finally secured distribution exclusively through Wal Mart with a May 2011 release date. Most of it is, hm, not revelatory or worth revisiting (and that’s coming from someone who recently got “Aretha made me.” tattooed on their ribs), but there are two shining exceptions. First is her growling, smoldering cover of B.B. King’s “Sweet Sixteen”. Vocally, she’s as immaculate and unrestricted as only Aretha can be. She juices every bit of emotion out of this blues classic. Second, is a duet with gospel powerhouse Karen Clark-Sheard, “Faithful”. A Richard Smallwood composition, the two channel their spiritual upbringing for Aretha’s final gospel recording. Even on this, Aretha singing gospel remains a magical and unmatched event. Aretha: A Woman Falling Out Of Love is likely out of print and no longer listed on Wal Mart’s website, but is available on Amazon.
Essentials: “Sweet Sixteen”, “Faithful”

A deal was reportedly in the works to reissue the elusive 5 Aretha Franklin albums in a box set back in 2012. Roger Friedman (who broke the news of Aretha’s condition before her death) reported that Aretha reached a distribution deal with Universal Music Group, but no further information ever came to be. It’s unfortunate because the reissues were set to include a dozen unreleased tracks from the various sessions, essentially an album of material on it’s own. Will we ever see these 6 albums released to streaming services? Only time will tell. Until then, enjoy the shining moments with the help of YouTube.

Anastacia’s Freak Of Nature Was A Turning Point